A local man recently swam more than 10 miles of Lake Lanier to raise awareness about protecting area waterways.
Buford resident John Fox swam from Buford Dam to Browns Bridge as part of a partnership with non-profit Chattahoochee Riverkeeper to raise awareness toward protection of the lake and river.
“It was about 11 miles and took eight or nine hours,” Fox said. “The reason for the swim was to raise awareness for protection and preservation of the waters in the Atlanta area, namely Lake Lanier and the Chattahoochee River.”
Fox said he was inspired to attempt the swim because he has lived near both waterways and felt it was a chance to combine a hobby with a cause he is passionate about.

“I grew up in the Lake Lanier area, and so I’ve always been around the waters. I’ve been conscious of the water quality and quantity,” he said. “When it came up, I thought this would be a great way to utilize my interest to raise awareness for the cause.”
To prepare, Fox said he trained six or seven days a week, mostly swimming about half the length and alternating days between more intense and lighter swims
His motivation came from, in his words, more of an adventure background than a pool background.
“This is my longest swim to date,” Fox said. “I don’t really have a competitive swimming background or in a competitive running background, for that matter. Most of my experience is in ultra-length events, like I used to do a lot of backpacking, fastpacking, where you’re trying to cover a lot of ground in a short period of time.” 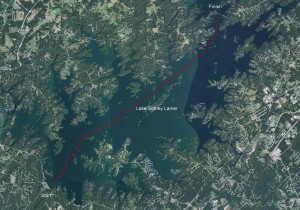 After setbacks in training, Fox said a high point in the experience was making it half-way and realizing he would be able to meet his goal.
“I was really excited to complete it,” he said. “I was a little worried that I might not be able to complete it because I had some training setbacks, stressed my rotator cuff, things like that … I didn’t know if that was going to affect the swim at all.”
Fox said he encourages those interested in keeping the river clean to consider donating, volunteering or learning about Chattahoochee Riverkeeper.
More information about the group can be found at Chattahoochee.org.