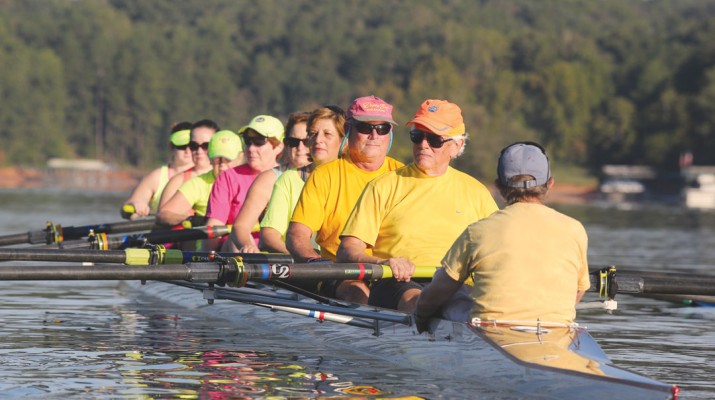 Story and photos by LAKE staff

Learning how to row is like riding a bicycle. It isn’t always easy and you may fall over once or twice, but that’s just part of the learning process.
For Norma Caskey and Lori Davila, nothing was going to stop them from learning to row.
“The first time you get in the boat, you kind of wobble,” Caskey said. “And it’s like riding a bike. After the first one or two times, the bike quits wobbling. You know how to control it or manage it.”
However, rowing is not as easy as it looks.
“I didn’t realize how intricate it is,” Caskey said. “You think you just get in the boat and play around in the (boat) and you just start rowing. But there’s a lot of technique and a lot of coordination and teamwork.”
To learn the techniques and teamwork, Caskey and Davila registered for the summer session of the Learn To Row program offered by the Lake Lanier Rowing Club. For six sessions, participants ages 14 and older are taught how to row on Lake Lanier.
The average age of the novice rower started at 14. Caskey, who will turn 60 in November, turned out to be one of the older members out of the three classes offered from June to August. In fact, out of the three summer sessions, nine students were older than 60, said Howard Stranathan with the Lake Lanier Rowing Club. The oldest person was 71.
Despite being in separate classes — Davila in June and Caskey in July — both women had the same goal: To learn to row.
“I was excited to learn because I thought it looked so graceful, you know, how you see (it) in the movies,” Caskey said, noting most of her friends and family thought she was doing it for the exercise.
However, it was not the only reason she wanted to climb into a boat and stroke through the water. Caskey was inspired by the nonfiction novel “The Boys in the Boat,” by Daniel James Brown. It chronicles the career of nine rowers who competed in the 1936 Olympics.
Therefore, when Caskey attended the Lake Lanier Rowing Club’s Polar Bear Plunge last year, she saw a sign-up sheet and enrolled in the class.

“I had never thought about doing it before,” Caskey said.
Davila had participated in a beginner’s course eight or 10 years ago with her husband. This summer she decided to try the activity again.
“I wanted to find a new sport,” Davila said, adding she enrolled because she had time.
She quickly remembered her rowing skills, like the never-forgotten skill of riding a bicycle.
While learning to row was new for one woman and a refresher course for the other, being on the water was not. Both women have extensive experience with the lake and water sports.
One of Davila’s favorite pastimes is being on the lake. She spends half her week in Buford on her houseboat. So she was not nervous about getting into the water, either.
“I’m definitely a lake person,” Davila said.
Caskey lives on the lake and felt pretty comfortable in the water.
Both women also lead active and outdoorsy lifestyles.
When she isn’t rowing, Davila enjoys biking, swimming, yoga and tennis. Caskey enjoys running, hiking, water skiing and taking her boat out on the lake.
Both women also wished they had learned how to row at a younger age.
“I wish I had learned it earlier,” Caskey said.
Davila who played high school volleyball, said she now regrets not competing in collegiate rowing.
While both women are in their 50s now, their ages factor into their determination and enjoyment of the water sport.
“When I’m rowing, I feel like a 24-year-old,” said Davila, 54. “Everyone says it’s a sport for a lifetime.”
Caskey, 59, did not let her age stop her momentum to be the best rower she can be.
“This is something that I can continue to do when my body starts giving out,” Caskey said. “It’s not hard on your joints.”
While it may not be hard on joints, rowing is a full-body aerobic workout. It works out the muscles, while being relatively low-impact on the body, Davila said.
Davila has some occasional shoulder pain, but it wasn’t bothered by rowing.
“You row with your legs,” she said.
Rowing is not without its learning curves.
Similar to getting scraped knees after falling off a bicycle, rowers eventually plunge into the water.
“They said, ‘It’s not a matter of if you go in, it’s when you go in,’” Caskey said. “But I haven’t ever seen anybody go in.”
And while some quit after falling off into the water, Caskey and Davila did not.
“I haven’t fallen in yet!” Caskey exclaimed.
For those who may fear falling into the water during their first or second lesson, the Lake Lanier Rowing Club has “training wheels.”

“Some people are nervous about being in the water and going in the water,” Caskey said. “Some people were put in the boat and they had training wheels, like small floaties out beside the boat.”
The floats, or pontoons as they are officially called, help stabilize the boat.
Learn To Row graduates and younger rowers also help with the class, including Duane Schlereth.
He took the class in 2003 and has enjoyed rowing ever since.
“It’s a lot of fun. It’s challenging,” said Schlereth, who started helping with the classes shortly after he took the course.
As the classes progressed, Caskey and Davila learned different skills and terminology with their classmates.
Davila enjoyed learning new things every week, but said the first two sessions were the most difficult.
She said everything was new to her, but she picked up the instruction quickly.
Caskey also had some difficulty with the speed of instruction at first.
“It’s a lot of stuff all at once,” Caskey said. “There’s a lot of instruction, because it is technical. But if you keep going, even if you don’t know what you’re doing, you come out on the other side.”
One day they learned rowing terminology and commands. The next day, they learned techniques.
“You have to hold the oars a certain way, and you got to turn your wrist, and go back and drop them in the water at the right time,” Caskey said. “You got to bend your knees, and don’t look outside the boat, and shut up.”
It was a bit frustrating at times for her, but she refused to quit.
“You’re thinking, ‘Can they give me one more rule or one more thing I have to watch?’ This hand goes over this hand. Don’t bend over, bend back. Don’t go that far,” Caskey said.
Eventually, it all came together.
“It’s like drinking water from a fire hydrant at first,” she said. “And then it all starts clicking.”
When Caskey mastered the techniques and terminology, she was more determined to do well.
“It’s just a personal satisfaction, because you can feel it immediately when you aren’t doing it properly,” she said. “You get instant feedback, and you know and you want to be the best.”
Rowing in a boat with eight people also spurs your determination to improve.
“You want to do good because everybody in the boat knows you’re the one (who) didn’t get your oar in the water,” Caskey said. “It’s like being a Rockette, you can’t be the only one who’s kicking.”
She added the instructors were incredibly helpful, encouraging and good teachers. They wouldn’t push anyone to do anything before they were ready.
Eventually though, the rowers bond with each other during the classroom instruction and in the boat on the water.
“It was a good group of people. Everybody was very open and friendly,” Caskey said. “We all walked in and we were chatting up right away.”
A self-proclaimed perfectionist and overachiever, Caskey is determined to improve. Therefore, she enrolled in the Learn To Row II program, which is designed for intermediate rowers.
“I came out thinking I was pretty damn good,” Caskey said.
“The more that I learn, the more that I know that I have to learn,” she continued. “The more you learn, the more you start to realize that you have to become one with the boat.”
Learning hasn’t stopped yet for the Gainesville resident, who completed the second program at the end of this month.
After that, Caskey said she will be out on the lake rowing whenever she can.
“It’s easy, it’s fun,” Caskey said. “I think people should check it out.”
Schlereth agrees.
Retired from a public accounting firm now, he rows three or four times a week. During his career, rowing was his way to escape the office and its troubles for a few hours.
Davila has been on the lake numerous times since her class ended and has worked to perfect her technique. She said she goes out on the lake to row twice a week.
“I would go Friday, Saturday, Sunday, but that gets to be a bit much,” Davila said.
Both women said they would go more often if they could.
“It gets really addictive,” Caskey said. “I love it. It’s so freakin’ cool.” 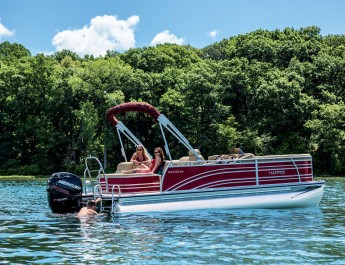