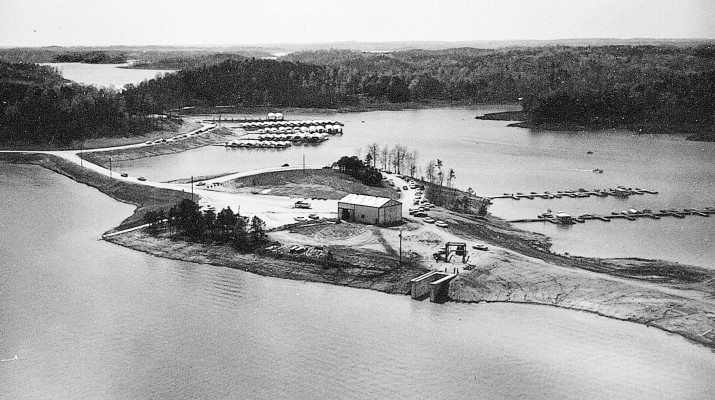 Story by Bekah Porter | Archival photos courtesy of The Times

“The rushes cried Abide, abide,
The willful waterweeds held me thrall,
The laving laurel turned my tide,
The ferns and the fondling grass said Stay,
The dewberry dipped for to work delay,
And the little reeds sighed Abide, abide,
Here in the hills of Habersham,
Here in the valleys of Hall.”

In 1887, a Confederate War veteran put ink to page and wrote words that immortalized North Georgia.
When Sidney Lanier penned what he considered to be his crowning achievement, he never imagined that the hills and valleys so lovingly commemorated in his poem, “Song of the Chattahoochee,” were just one generation away from experiencing such a prodigious permutation as to render them unrecognizable.

In 1946, government officials walked past the waterweeds of Lanier’s beloved river, and they forged trough the ferns and fondling grass of the 19th century poet’s sacred place, and they saw not the reeds or the laurels or the dewberries. Rather, they saw power. And lots of it.
On that day, 70 years ago, the U.S. Army Corps of Engineers peered into the churning waters of the Chattahoochee and saw a future of sustainable energy.
The next decade passed in a flurry, as homes and farms and businesses and bridges all fell victim to a grander vision. The government purchased acre after acre, lot after lot, landmark after landmark, all in the pursuit of constructing the Buford Damn, a 200-foot concrete marvel tasked with the daunting duties of flood prevention and electricity production.
But perhaps more significantly, the edifice is responsible for creating a liquid Mecca that draws nearly 8 million visitors annually and packs an economic punch of some $547 million spent each year in the five counties touched by the water the damn holds back.
This summer marks the 60th anniversary of perhaps the most monumental moment in the region’s history. The doors of the Buford Dam closed, and the river swelled, cresting its banks, spilling far past the boundaries admired by Lanier. 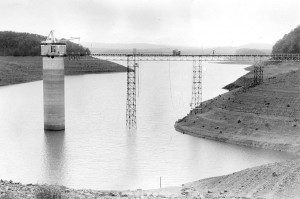 “When those gates closed to begin filling up the lake, (that) was the biggest moment in the lake’s history,” said Tim Rainey, Operations Project Manager of the Army Corps of Engineers. “That is considered the birth of (the lake) by many and is when it was named.”
Just as Sidney Lanier could hardly have conceived of his hallowed Habersham and Hallow as a massive manmade lake that covers 38,000 acres and provides more than 500 miles of shoreline, so, too, could he have foreseen that what has come to arguably be the Peach State’s most significant body of water would be named in his honor.
This is the story of Lake Lanier.

We recently sat down with Army Corps of Engineer Operations Project Manager, Tim Rainey for a Q&A:
Question: How important is Lake Lanier to the region?
Answer: Very important: It provides recreational opportunities and benefits, water supply, flood protection, hydropower generation (renewable energy production), a trout fishery in the Chattahoochee River, quality of life and contributes to economic stimulation.
Q: What would the area be like without the lake?
A: The area inundated by the lake was rural farmland prior to the development of Buford Dam. I could only anticipate that it would be much the same. Without the attraction of the lake, would the current level of development have occurred? Would the area now be a part of metropolitan Atlanta? Would people live in the area and commute to Atlanta for work? One thing is for sure, without Buford Dam, there would not be a trout fishery on the Chattahoochee River. 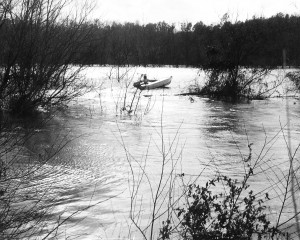 Q: How would you describe the lake’s impact and reach?
A: The lakes reach in the area includes contributing to quality of life as well as economic stimulation. However, the lake’s reach extends far beyond this area. From protecting life and property from flood events downstream to providing thousands of homes with renewable energy to providing millions of people opportunities for recreation, the lake has an extensive reach.
Q: What has been your favorite memory related to the lake? Or what do you think is most impressive about the lake and its surrounding area?
A: The most impressive thing about the lake and its surrounding area is that the lake has and continues to perform as designed and intended. Starting off with small rural communities to the current extensive development around the lake, and all other pressures on it, it continues to meet all mission requirements.
Q: What do you love to do on the lake?
A: I simply look at it. Water has a tremendous calming effect.

Lake Lanier as a “jewel”:
“Lake Lanier has a nearly 60 year legacy of recreation and commerce that has been a major part of the suburban development of Hall and Forsyth counties. Without our “great lake” it is unlikely metro Atlanta would look to its northern neighbor as a major recreational destination. In an area that takes great pride in promoting quality of life, Lake Lanier is a jewel in our crown for attracting residents, industry and visitors.” — Stacey Dickson, President of Lake Lanier Convention & Visitors Bureau

BY THE NUMBERS:
8 – Million people estimated to visit Lake Lanier annually
38,000 – acres of water
540 – miles of shoreline
700 – families relocated to make way for the Lake
$4,100 – Amount paid for Henry Shadburn’s 100- acre farm, the first tract of land purchased for the project
1,070 – Feet above sea level that marks the Lake’s full pool level
1957 – Year the Lake reached its full level
9,390 – Acres of trees cut to make way for the dam and lake
2 – Years it took to fill the Lake
$547,000,000 – Estimated economic impact of Lake Lanier’s visitor spending
5 – Counties in which the Lake is present
3 – Turbines used to collect energy
57,000 – Homes that could be powered by the energy collected by the dam
400 – Million gallons of water that the Buford Damn discharges daily
53 – Federal, state and local parks located in the Lake’s vicinity
3,500 – People who attended the groundbreaking ceremony
60 – Miles from Atlanta to Lake Lanier
1,300 – Migratory birds that call Lake Lanier home

Finding the right place to park your boat