As one of Georgia’s top attractions, Lake Lanier draws visitors every year from everywhere — boaters, campers or just general fun-seekers.

But as they’re hauling boats to the exits, the 38,000-acre tourist spot remains the backyard for thousands of year-round residents.

“The lake is for everybody to share, but … when you live here, you have a different mindset,” Hall County resident Jeff Daigrepont said.

And it’s that distinction that helped launch “Lake Lanier Dwellers,” a private Facebook group that has grown to more than 1,200 members since its start in July 2014.

“The group is really about keeping neighbors informed,” said the group’s founder, Forsyth County resident Lu Treadway, who has lived on Lanier for four years.

The page features a variety of photos of the scenic lake, often taken from members’ boats and docks, and posts that are informational, fun or both. It has a nautical feel, with information geared to those living on or interested in Lanier.

But it’s not all just sunrises, lake vistas and people smiling and waving. The page also has a serious tone, featuring links to news stories about heavy topics affecting the lake, particularly the drought that has drained the lake to just above 1,060 feet above sea level, which is 10 feet below full pool.

“I try to minimize the amount of advertising,” she said. “We share articles, we talk about the water levels, we make each other laugh — it’s a great community.”

The Dwellers isn’t the only group with a keen interest in Lake Lanier. Lake Lanier Association, founded in 1966, started as a group of homeowners but evolved into an organization with a variety of programs supporting its mission to ensure Lanier is a “clean, full and safe lake,” according to its website.

“I’m very tight with them,” Treadway said of LLA.

And like LLA, Lake Lanier Dwellers has members scattered among the counties that hug Lanier.

Dawson County resident Matt Pursley is one of them. He has lived on and off the lake since the early 1980s.

“Once you get to the lake, you escape the hustle and bustle,” he said, describing the lake’s appeal.

“What’s good about (Dwellers) is you see what’s going on around the lake other than in your little neighborhood,” he said. “If somebody’s boat comes loose, then in a very short period of time, somebody’s got a post that says a boat is floating around in the lake.

Even though it has a social media format, the Dwellers isn’t strictly a digital experience, as members hold get-togethers after posting the particulars on the page.

“You go by and introduce yourself and next thing you know, you’re meeting them for dinner,” Forsyth County resident Paul Weatherholt said.

A lake home with vision 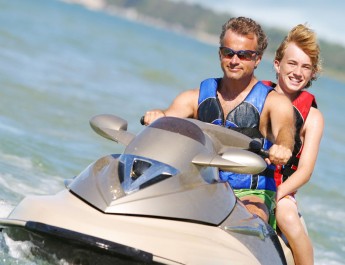